Warning there are 8 Flyrants in this battle report!

So round 5 I walk to the table to play a major blogger about tyranids Jim Yeh aka Jy2 on dakka.  Jim does a lot to help tyranid players out there.  And Ive needled him a bit recently for pushing 5 tyrants as being the most competitive Tyranid list, and forgetting about my list =-).  So this was the opportunity for us to go head to head for Tyranid supremacy.
Jim had 5 Flyrants
3 solo lictors
2 units of rippers
3 mucolids
mawloc
Malanthrope
Void Shield generator

I won the roll and made jim go first.  He had a smattering of mediocre powers, something like 3 or 4 horrors.  But also 4 warp lances and some paroxysms.  I rolled psyscream on all 3 of my flyrants and had to hold in my glee.  I had reroll reserves as my warlord trait.

Jim deployed all his flyrants along with his malanthrope.  I deployed all my flyrants and put a lictor inside the bastion, and a spore mine unit in my deepest corner.  The lictor was there to see if I could draw Jim into a trap.  3 screams gave me a huge advantage in the battle... even one scream could turn the tide but 3!

Turn 1 Jim moved all the flyrants up behind the ruin while still in void shield range.  I then flew my flyrants off the board. 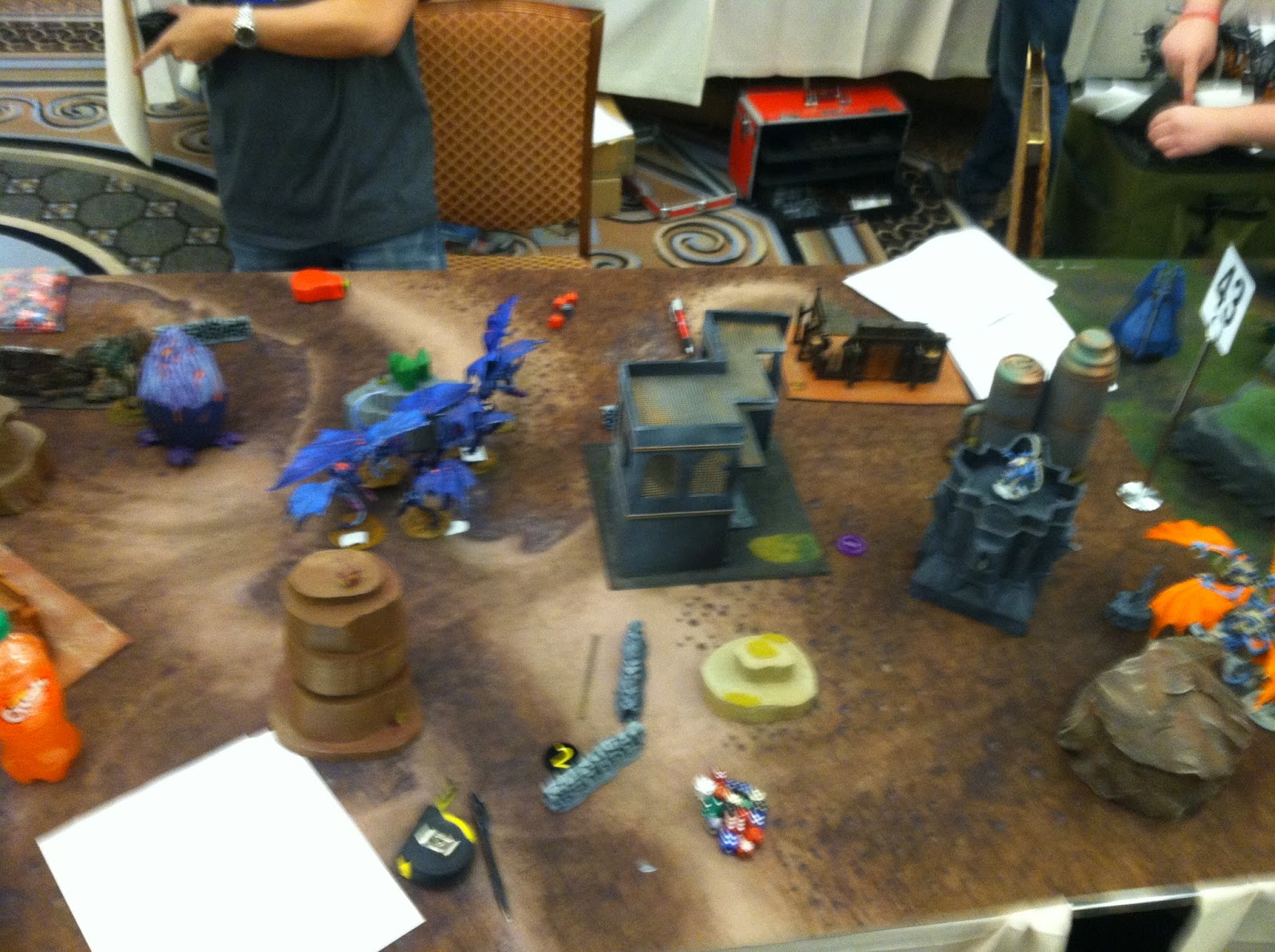 Turn 2 and Jim entered the trap.  2 Flyrants flew off the board and the other three circled around my bastion.  One of his lictors landed on the battlements while the other landed near his malanthrope. 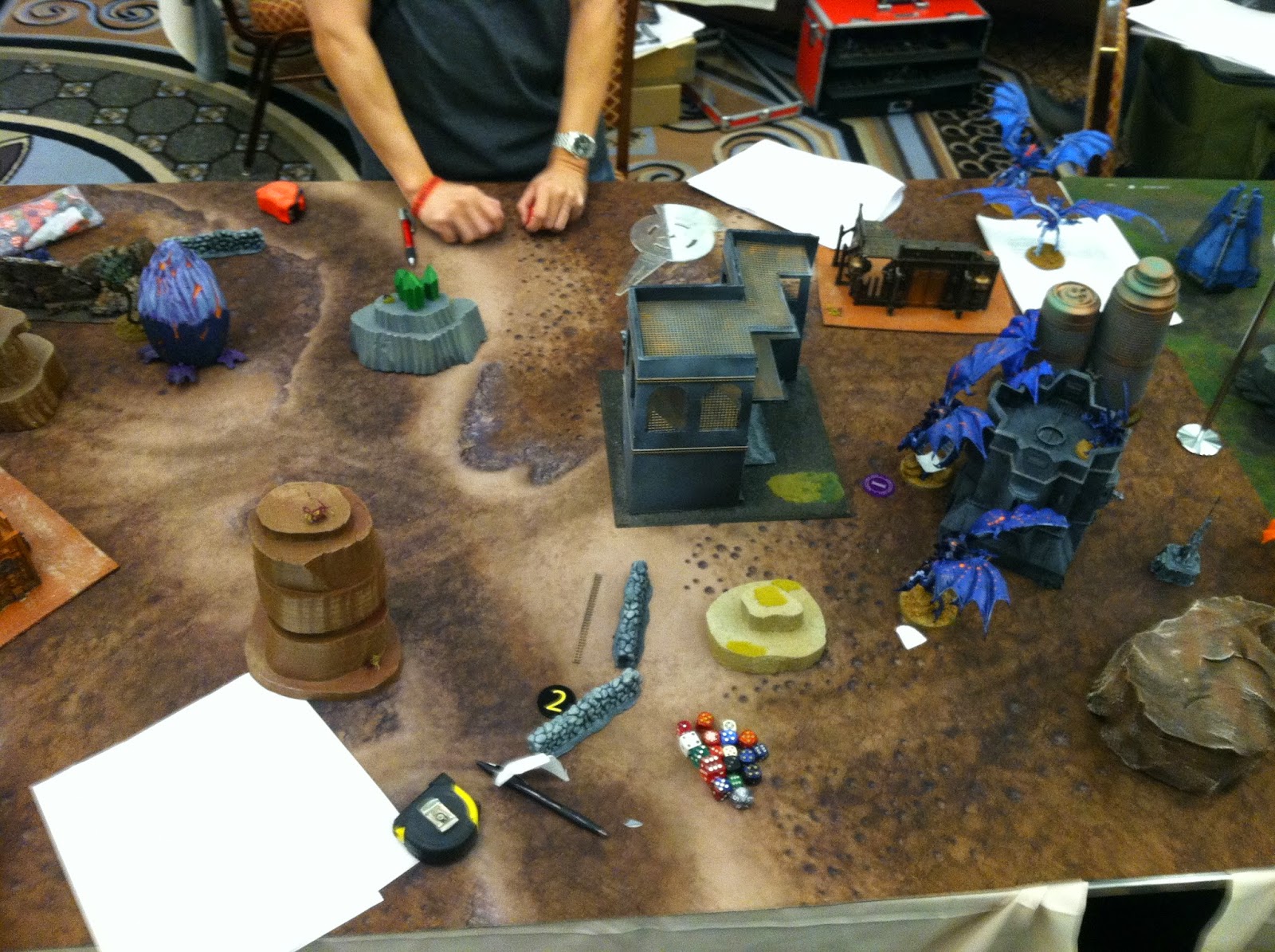 Turn 2.  I dropped mawlocs on his lictor and malanthrope hitting both... after three mawlocs both were dead and two mawlocs had landed while the other had gone back to reserves.  Lictors and spores landed around the board, mucolids spreading out to possible hie tyrant locations, lictors landing near objectives one the left side.  3 flyrants returned and all 3 were able to get in 6" of all three of his flyrants and the screaming began.  I top loaded first scream with a ton of dice and he tried to block but didnt roll quite enough 5's.  Scream one roll 10... I turn to Jim and say that Flyrants dead and he smiles and says no Im ld 10... forgetting psyscream is 2d6+2 and that shadows in the warp has reduced him to ld 7.  Second Flyrant on first scream... 11 another dead Tyrant... no damage to third.  2 more screams and that third flyrant is still not hurt.  So I shoot it with all three flyrants and do 3 wounds but it passes grounding to stay alive darn. 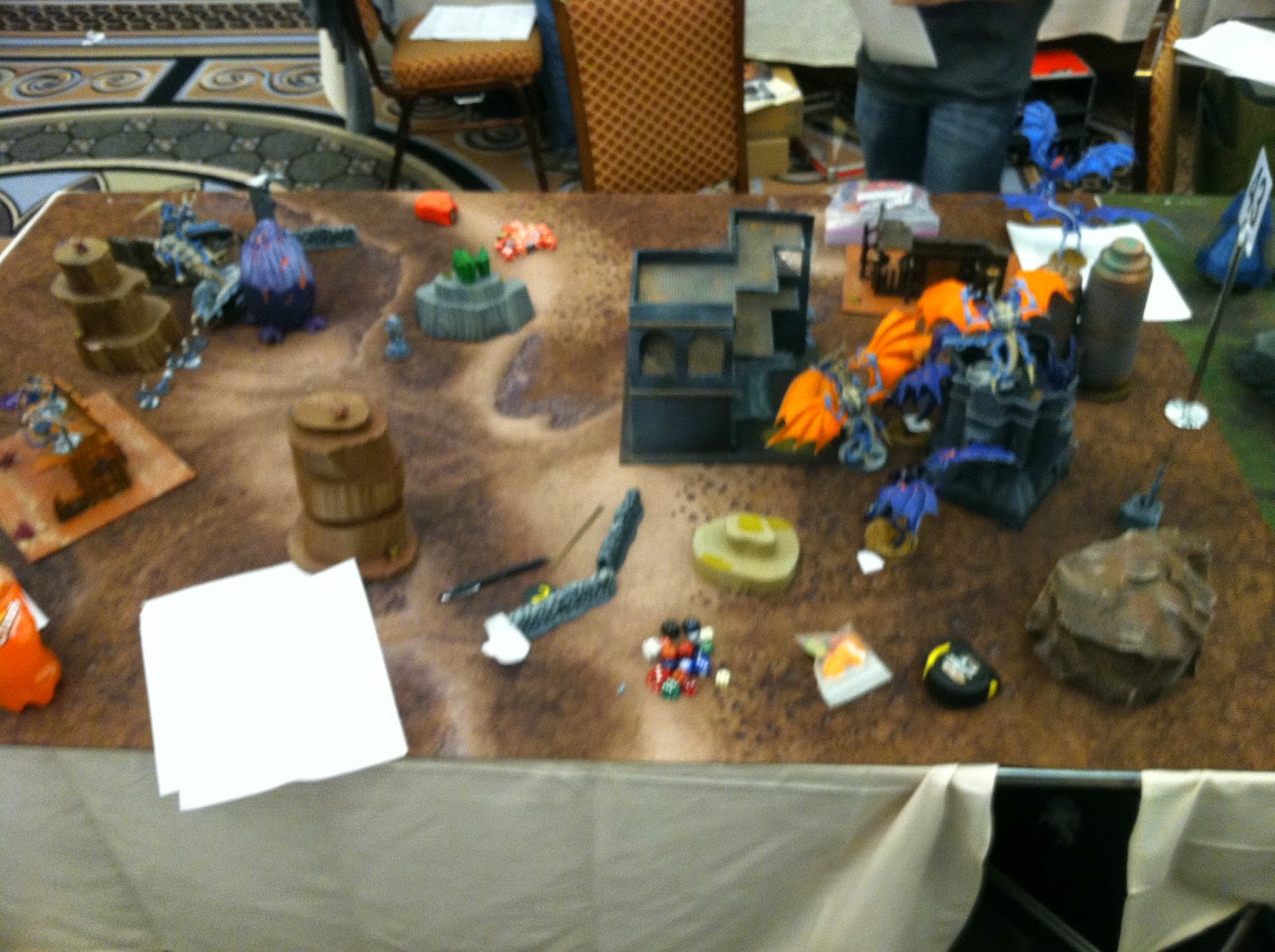 Jim scatters a few mucolids into mishaps killing 2 and third lands near top let corner mawlocs.  Rippers land near left red ruin and near obj 2 at bottom edge.  His flyrants return and as ineffective as my shooting was his is the reverse.  Two flyrants gang up and kill my warlord.  His third does 3 wounds to my other flyrant.

I move two tyrant guard onto the board at bottom.  Mawloc precision kills his mucolid.  Lictors move down from ruin and assault and kill rippers on left.  Ony flyrant flies up board and screams for no damage on his and then instead of running off the board stays to shoot... doing no damage, bad gamble.  Other flyrant... who only has one wound left lands and attaches to tyrant guard and screams to kill his wounded flyrant.  Shoots snap shots at his warlord doing nothing. 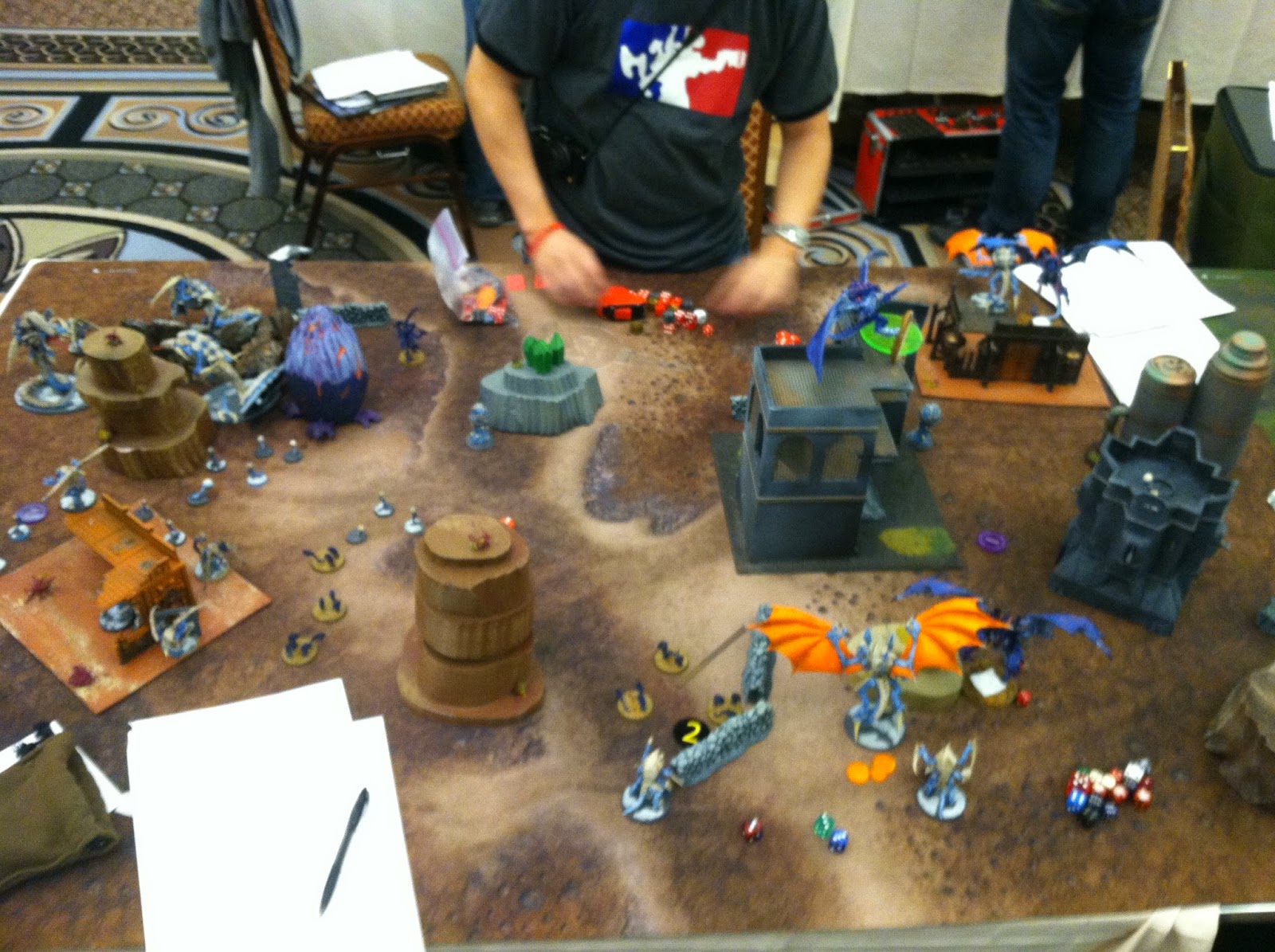 Jim's turn 4 and his mawloc and last lictor comes on.  Lictor he places bottom right corner.  Mawloc goes after some of my units but doesnt hit anything.  His two flyrants kill my flyrant at the top right of the board.  Rippers assault tyrant guard. 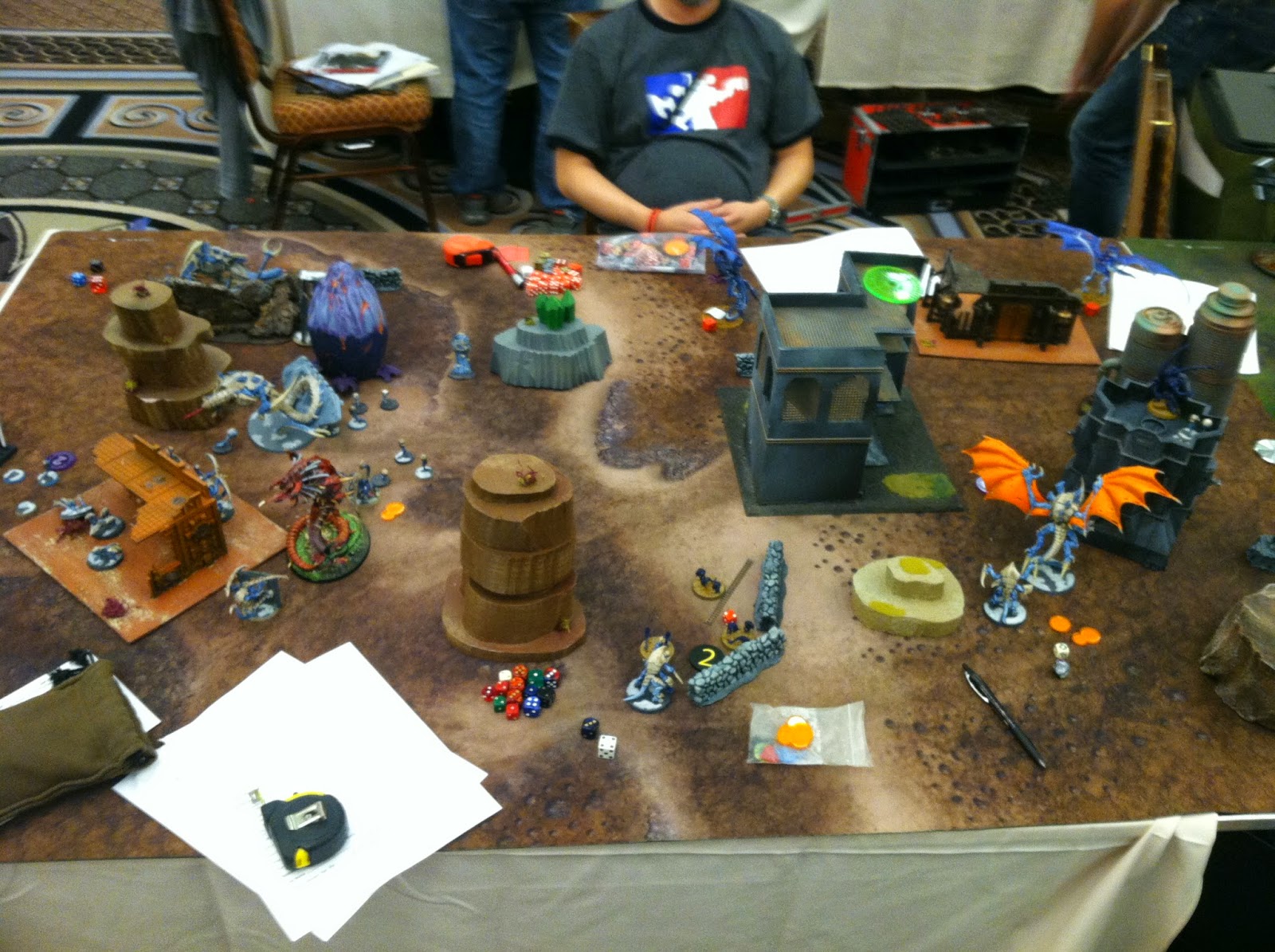 I move the tyrant I have remaining and his guard up and they flame the bastion where he still has a lictor and do the last hull point causing a collapse and killing the lictor.  3 lictors and a mawloc charge his mawloc and the lictors do 5 wounds and the mawloc cleans up.  Tyrant guard kills some rippers. 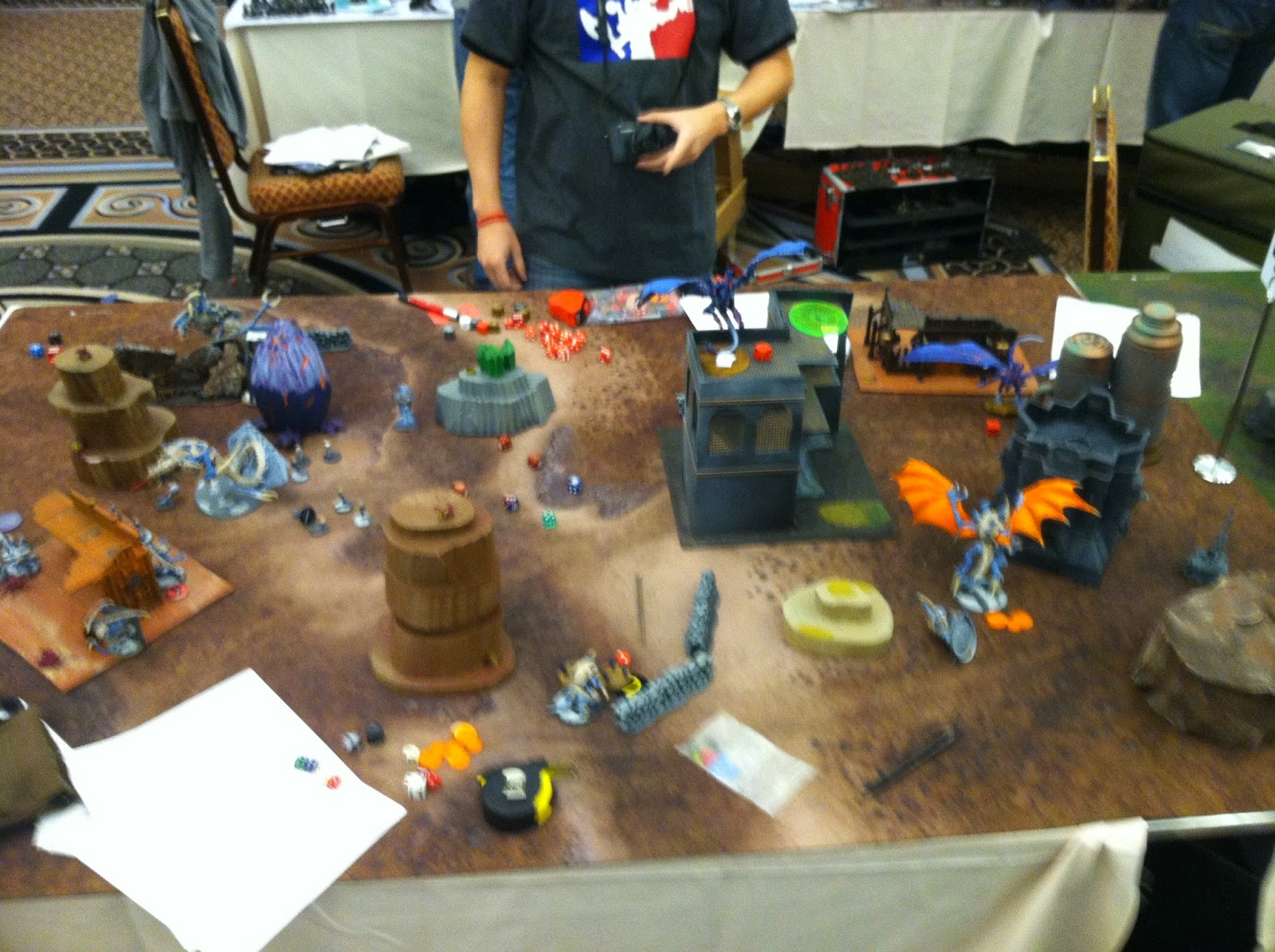 Jim comes towards me on turn 5 and shoots my tyrant and kills his guard but the flyrant lives.  More rippers die.

My turn 5 Im going for points, need that warlord.  I vector him for one wound since he is on the ground and then scream... but fail to cast, and fail to kill him with last gun.  I have a commanding objective advantage and so burrow my mawlocs to wait for a possible turn 6.  But the game ends.  I win primary and seconday and have linebreaker, for 8 points.  Solid victory but starts nagging on my mind that Im leaving points on the board in a race to the finals.
Posted by Sean at 7:09 PM